A life (mine) with a German Shepherd - part two

Read all the article, here the FIRST PART

Once upon a time there was a neotenic hypothesis: dogs that have more juvenile physical traits would have a behavioral development equal to a wolf puppy, while dogs that look more like an adult wolf, a more adult behavior. A German Shepherd’s behavior should be similar to that of a wolf. There are still those who call the German Shepherd a wolf-dog.
Adult? If the German Shepherd feels comfortable, it has exactly the same look at two months and at 12 years. 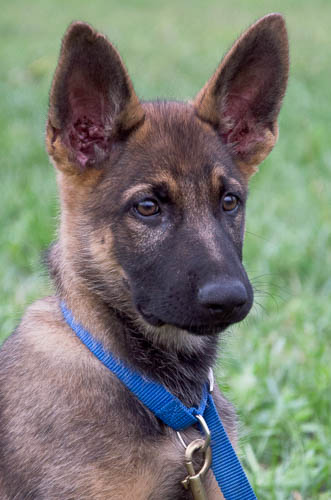 ADDICTION TO THE BALL 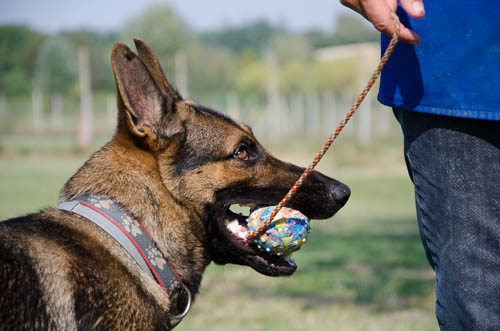 In Puma's brain a huge, all-consuming program opens: "ball". When this program is open, all other programs are blocked or slowed down. The ball program includes search, fix, grab, chew, compete, and chase the ball. In order to make sure that the rest of the brain of a German Shepherd works, it is necessary to develop other programs with a continuous training. It is impossible to close down the ball program.

THE GERMAN SHEPHERD AND NOT LETTING GO OF THE BALL

Working with some dogs will be like hitting your head against a brick wall. Each of us, in our own way, extend our personal experiences to the whole world. Do you have a dog that lets go of the ball, all dogs let go of the ball. If they don't release, it is the owner’s fault for not being capable. I have only ever had dogs that let go of the ball. My dogs, all my dogs, come back on recall, retrieve and let go of the ball. Ginger no, Arj yes, but does not retrieve, Puma retrieves the ball but no, she doesn’t let go of it. 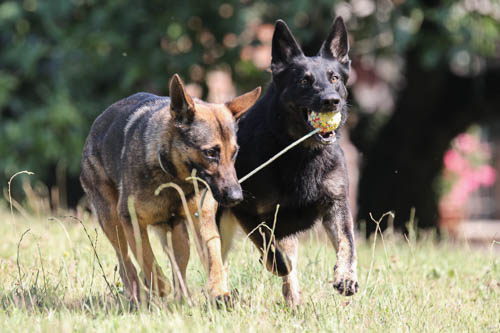 The problem is not me. The problem, not for the German Shepherd though, is that the dog has no intention of dropping the ball. The dog will bring you the ball, even invite you to take the strap, and will dislocate your shoulder playing tug-of-war and then feel hurt by you letting the grip of the ball. But not Puma, she doesn’t drop the ball. So I developed the technique of the thumb in the in the throat, and stand the looks of disapproval from others that still thinks that all dogs let go of the ball, if you're not so stupid you won't be able to even get there. No, I don’t wish them a German Shepherd. They can keep their dogs that let go of the ball. 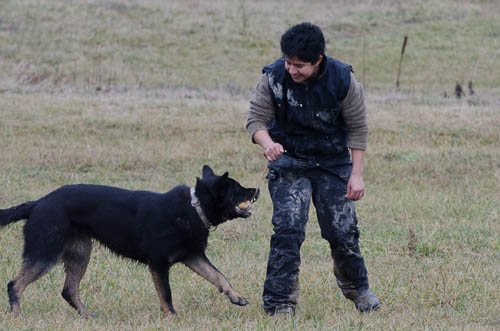 Somehow, Puma became aware of the existence of other people one of those nights where she let Martina pet her. An event to mark on the calendar. She had drunk a whole bottle of precious oil for dogs, her hair was shiny, and in my opinion she just wanted to show off. I think that Arj has managed to be touched by a total of five people. But never when there is cake ‘panettone’ on the kitchen table.

There are dogs that I call affectionately "social idiots". Which is deeply unfair. Because within the breed there are dogs with extraordinary social competences, and others who are in great difficulty. I have experienced Ginger, with extraordinary social skills, Puma, which is somewhere in the middle, and Arj, which I would say belongs well in the category of "social fools". Not for anything, but for her every dog is like an American soldier who is about to enter the jungle of some Pacific island ready to shoot. Someone should explain her that the war was over in 1945!!! 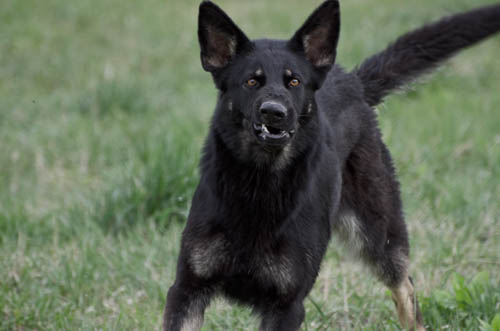 A common trait in dogs, but particularly developed in German Shepherds, is: if you tell me that he must die, I’ll go and kill him. Brick sends Puma against dogs that she doesn't like. Of course I have learned long ago to control my murder instincts, which for that matter never concern dogs. An ancient saying about shepherds reads: at the feet of the owner or at someone's throat. Here, I would like a change in the attitudes toward this breed in the direction of a more peaceful approach toward us, you and even them. 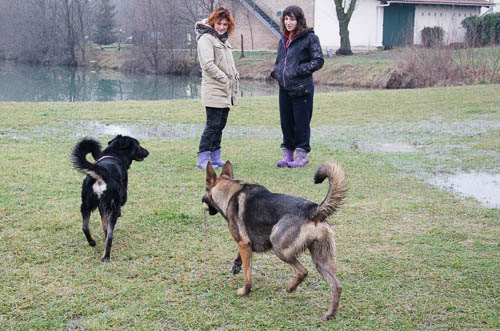 There are 50 meters of asphalt before arriving at the beginning of the path. 50 meters of Puma screaming on a leash. Somewhere something went wrong. Some famous breeders must have passed on the gene for the scream of frustration. The whining of frustration. Arj, eventhough she is much more quiet than Puma, whines endlessly. Puma fortunately doesn’t. That is, if I don't hold her back... (and I make sure that I don’t). Then, of course, they bark to warn.
If you get a German Shepherd, and he guards and barks, you can't write to me and ask me how to make him stop. You can't make him stop. They have the gene for barking to warn. Resign yourself to it, or move to live in an isolated house and enjoy every time he does it. 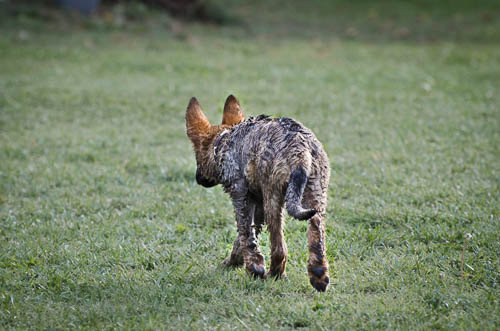 I read it and for a moment I also believed in it: German Shepherds’ hair has a bad smell. False. A well fed German Shepherd doesn't stink. If the dog stinks, you're feeding it with something it doesn’t assimilate well. And I'm not kidding.

(End of the second part)
Read all the article, here the FIRST PART