The other day, my dog decided to teach me how to wash dishes. I tried to fight it: "We’ve done it for hundreds of years", but it argued that experience doesn't equate to expertise. "We have gripping fingers! The opposable thumb!". It looked at me with a skeptical look. Having appropriate tools does not mean that you are able to use them correctly. Thus, it sat next to me and began to teach me: "Don't put too much detergent on the sponge! otherwise you’ll complain that the salad tastes like dishwashing soap", “use the abrasive part of the sponge to remove any stain". It also tried to keep the dish while I was washing it, but its teeth slid on the detergent. I had a small moment of glory, thanks to my gripping fingers and opposable thumb. Monkey vs. dog 1:0
Dogs teach us many things, but no, they don't teach us to wash dishes. We are the ones, the ones that claim to teach dogs to be dogs. We are the ones that believe that we know better than a dog and how a dog has to behave.

"I DECIDED TO FEED MY DOG WITH A NATURAL DIET. THEY TOLD ME TO START WITH SOME CHICKEN, AND TO HOLD THE PIECE OF CHICKEN WITH MY HANDS, SO I COULD TEACH THE DOG HOW TO CHEW."

Two news: the dogs chew, for sure not as humans, and they know how to use their teeth to break, cut, tear and swallow. The teeth of dogs are not made for chewing food, and dogs do not chew the meat at all. They break bones, cut, tear the meat and swallow. They don't know how to chew because they are not cows, they are carnivores. Risks exist with very young puppies (from weaning to three months or so), because they don't have the strength to cut and tear, and therefore may try to swallow whole pieces, which could result in suffocation.
Therefore, it is important to feed with small pieces. How small is relative, depends on the size of the puppy. Denali, my German shepherd puppy, when two months old, could eat a chicken wing without difficulty. It took quite a long time for him, but without any issue. Looking at him, it looked like he was chewing, but he didn’t have big enough teeth, nor masseter muscle powerful enough, to cut and tear small pieces to swallow, and he was forced to use its mandibles. Just imagine cutting meat with a not so very sharp knife. 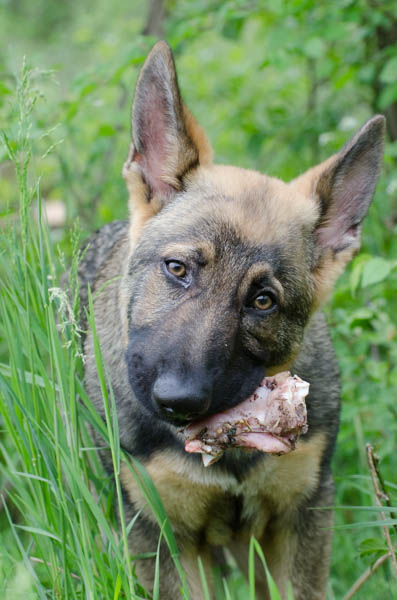 THE SECOND EXAMPLE IS THE HUGE EFFORT OF OWNERS TO TEACH THE PUPPY TO PEE AND POOP OUTSIDE THEIR HOME.

We adopt a puppy at 2 months old, we bring it home, and then the paranoia starts: "It pees and poops inside the house". I'll tell you a secret: it is perfectly normal for a two-month-old puppy to pee and poop inside the house. For two reasons: It has a small bladder, and it doesn’t have the ability to hold the pee back. I’ll try to explain it better, once again using Denali as an example.
There are naturally clean dogs that try to pee and poop as far away as possible from where they live, eat and sleep. Denali is not one of those dogs. He has never had any major problems to pee and poop at home, also because I have never even thought to inhibit and scold him. He is a puppy, he acts like a puppy. Therefore, mop and go. Initially he would pee and pp near the bookcase (or in the kitchen, if I forgot the door open) but growing up he would only pee inside the house (about three months old), and he would pee near the exit door: a sign that he was beginning to choose to pee and poop away from where he lives. 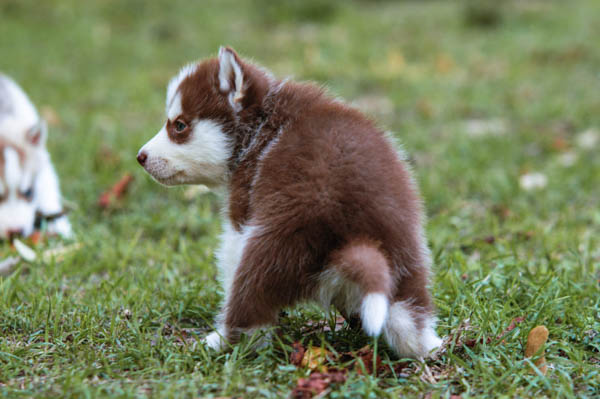 This is a natural tendency, we don't teach this to dogs. Only dogs who are forced to pee and poop where they live can unlearn (because they are obliged to do so), such as dogs tied to chain or locked in a box. The big change came at 14 weeks, when Denali acquired a new ability: holding the pee when he woke up and when he felt the urge. Smaller puppies poop and pee as soon as they feel the urge. From a certain age (around three months, some sooner, some later), they are able to hold back the urge and wait. It is revolutionary: dry floors in the morning!
All this, learning to pee and poop away from where they live, hold back the urge, happens naturally, we don't teach it to a puppy. Our task, in this case, is only to give the puppy a chance to get away from where he lives to pee and poop, and teach our puppy the surface where he can pee and poop. Dogs naturally tend to prefer natural surfaces, instead of surfaces with tile and cement.

RECENTLY, I WAS CONTACTED IN REGARDS TO HELPING A DOG. THE PERSON WHO WROTE ME TOLD ME THAT THE DOG TRAINER HAD ASKED HER TO STOP HER DOG WHENEVER THE DOG PERFORMED URINE MARKING BEHAVIOR.

According to that dog trainer this behavior indicates "dominance", thus the owner must make it clear to the dog that it does not have the right to mark on top. Also in this case, in my opinion, the starting point is that a human, a dog trainer in this case, is convinced that he/she knows what it's like to be a dog – more than a dog. Dog, I'll explain to you how to behave.
If a dog wants to mark over the urine of another dog,

However, the question is: what do we know about the olfactory communication of dogs? What do we know about what they communicate to each other through the markings? It is like witnessing a dialog in a foreign language and claim to know who is right, who is wrong, without even knowing the topic that is being discussed. 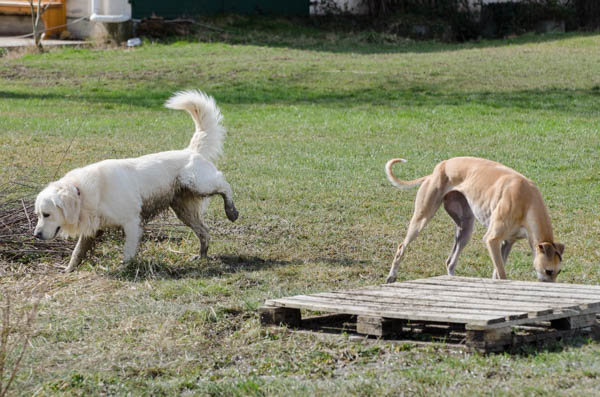 Dogs teach us to be better people, because they don’t try to change us. To dogs, it is enough being able to understand us and, also in this, they are better than we are. We struggle to understand our fellow man, and ourselves and we presume to know what a dog has to be and do, better than a dog.