Ten years of performing tests on dogs in the kennel, on pet dogs that attacked people, along with my experience in socialization classes allowed me to learn to recognize and understand aggressiveness. Nothing proves the knowledge of aggressiveness as being in front of an unleashed aggressive dog with no protective measures at all. A glance, the slightest wrong move may trigger the attack. What is it that allows me not to use any protective measure? As years passed by, a thin red line showed up between me and the dog . I can see it. In fact I can feel it. It's the boundary that sets apart aggressive communication from the intention to cause harm. A boundary that separates a threat, an aggressive display from bite wounds.

Most of the people are afraid of a dog that growls, that shows a menacing look, that rushes forward. Those behaviors are "corrected", or blocked, inhibited, punished. To me those behaviors is good news. A dog that threatens me is communicating, and, as long as it communicates, I can adapt my behavior and prevent the attack. Aggression is not positive, communication is positive. Crossing that thin red line means to render the dog communication ineffective, and force him to attack. When a dog attacks and bites, it means the dog failed to communicate and that he lost control. After attacking and biting, dogs appear to be in shock, even though they are the aggressors, not the victims. 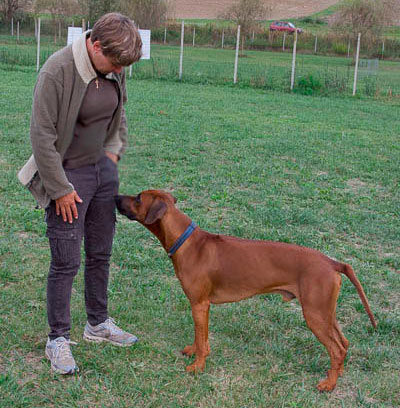 Aggressive communication still is communication, that is the information an individual forwards to another individual, and that allows you to change your own behavior and that of others. Don't consider just the aggressiveness, but try to feel the communication.

Aggressiveness triggers human self-defense responses, that block empathy and communication. To be able to communicate with an aggressive dog it's important not to feel afraid, and feel his own discomfort and fear.

Aggressiveness is an emotional mood. Aggressive behaviors are the physical evidence of a physiological state and an emotional frame of mind. To change this behavior, we must change the emotion. To inhibit the behavior is like taking an antipyretic instead of understand what causes the fever. Not only it is useless, it is dangerous.

Aggressive dogs are social outsiders. The first step to help them is not stop communicating. We have to look into their eyes to understand what they are saying, and "talk" to them. The dog may not be able to change his behavior at that time. But we can. We can avoid to cross that thin red line. Pictures and videos of the Ethograms were realized mostly during the Gentle Team socialization classes.