10 mistakes to avoid when socializing dogs 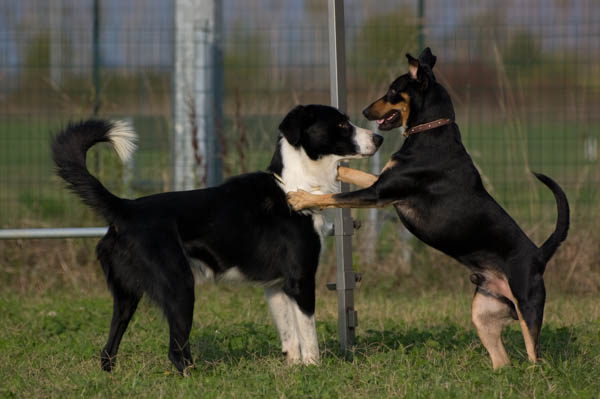 1. SOCIALIZING IS NOT ABOUT BRINGING DOGS TOGETHER

The first, and biggest, mistake is to think that socialization means to make our dog spend time with other dogs and other people. It does not mean to drag it to the shopping center or to run towards every dog that we meet during a walk. Socialization doesn't mean to expose our dog to all kind of stimuli, but instead it means to give the dog the tools to feel good when it is among individuals and in unfamiliar surroundings. Every dog is different; every dog requires a specific training plan in order to help it feel well. 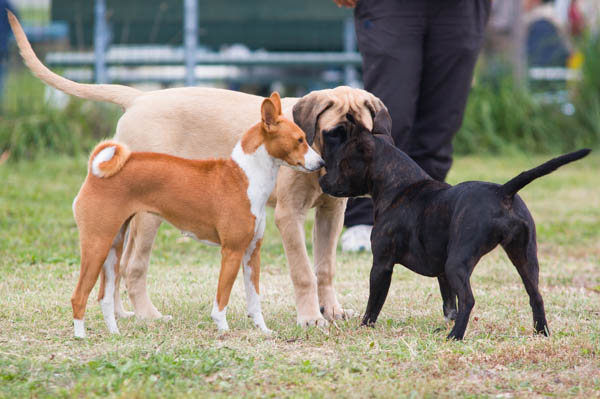 Brick, a Staffordshire, meets an adult female Basenji and a 4-month-old Mastiff puppy.
This is not an unplanned encounter. This is about learning to develop skills and welfare in each individual dog.

2. A SOCIALIZED DOG IS NOT A WELL-BEHAVED DOG

A socialized dog is not a dog well-behaved dog. It's a dog that feels good. A dog can feel good and still not like to have encounters with unknown dogs, or some type of unknown dog, or a specific unknown dog. Or unknown people. A dog with the appropriate skills knows which strategy to choose among different relationship strategies, and it also knows how to avoid another dog. One of the skills that a dog can aquire can be to avoid an encounter with another dog. The result of socialization is not to change the behavior or personality of a dog, but to get to know the dog, to figure out when it feels good, with whom it feels good, what helps it, and what causes problems for it. To learn how to foresee the outcome of an encounter, and to avoid encounters that could be harmful for its emotional health. 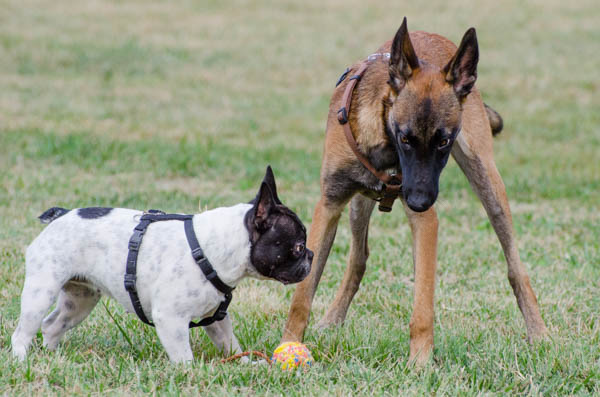 The French Bulldog stares directly at the Malinois puppy in a an obvious threat to gain possession of the ball. Communication between dogs consists of the whole spectrum of the ethogram and emotions, and not only a conduct that reassures and pleases the dog owner.

3. DO NOT LET LEASHED DOGS HAVE ENCOUNTERS

In cities, many encounters between dogs take place while they are leashed. A leash, no matter how long it is and although it is hooked to a harness, restricts the dog’s movements and forces the dog to go in the direction chosen by the owner, it reduces time and spaces of interaction. When you use the leash to block the dog or, even worse, to pull the dog back or drag it, it can cause tremendous stress for the dog and it can also kill its trust toward the owner. If it is really necessary for your dog to be leashed, then follow your dog, and if you want to separate two dogs, stop, block with your hand and back away when your dog is ready to follow you again. 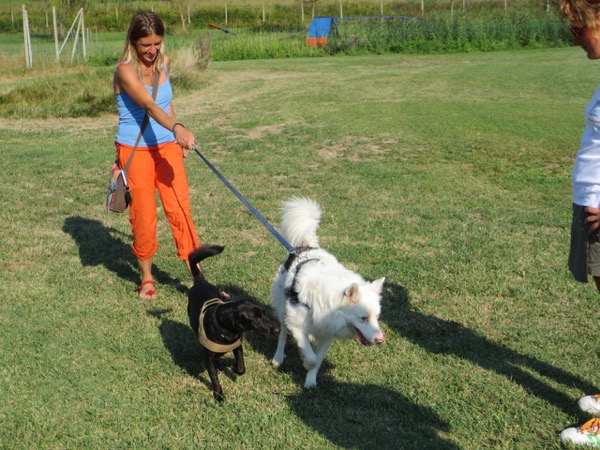 Morgan at a Gentle Team Socialization Class. Morgan is on a leash, because he is deaf and blind, and being bound helps him feel safer. Liviana follows him, paying attention to every change of his emotional state and to every request he may have. Interactions between leashed dogs require qualified knowledge, so as not to cause damage.

4. DO NOT INDUCE OR FORCE YOUR DOG TO APPROACH UNKNOWN DOGS

Many dogs throw themselves at other dogs, merely because they anticipate their owner's expectation of "socialization”. This happens mainly with puppies, or with breeds that people see as friendly. Forced meetings, too short and intense, cause anxiety in dogs and can lead to reactions of alarm, fear, and threat.

5. IT IS NOT TRUE THAT THEY HAVE TO "FEND FOR THEMSELVES"

I often hear dog owners state that when two dogs meet, they have to "fend for themselves", although there is no tension between them. Dogs rarely choose who they meet, and it is therefore our responsibility to manage their interaction. A dog may not have the physical strength, the strength of personality or the capability to stop an interaction that causes stress, fear or that exposes it to a risk. A dog can ask us to walk away, ask us for help. It is important to be in the moment not only physically, but also mentally and emotionally. 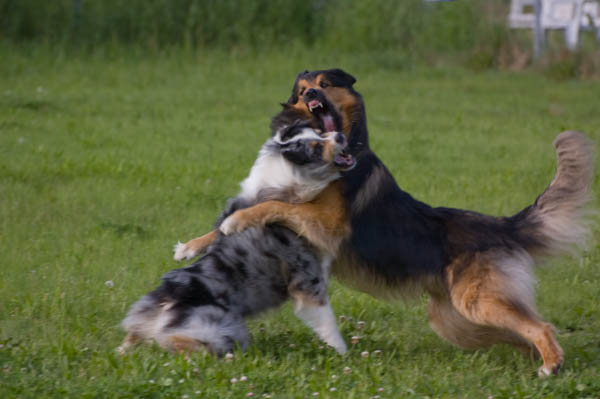 6. DON'T BASE YOUR CHOICES ON A BIASED OPINION

Prejudices regarding breed (dangerous dogs are Pitbulls, German Shepherds, Rottweilers...), gender (males get along well with females and vice versa), age (puppies must play with other puppies). Dogs are individuals; you should learn to look at them as individuals, regardless of their outward appearance. 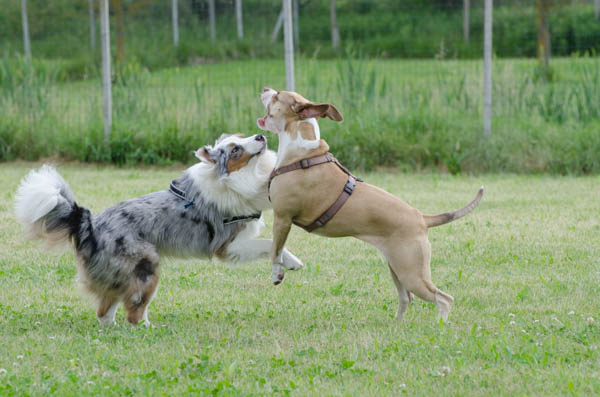 A young Australian Shepherd male meets a Pit Bull female. The male is impetuous and hormonal, but the female is not impressed.
Indeed, her intensity in the interaction increases up to a point where it causes problems for the young male.

7. DON’T TRUST WHAT OTHER OWNERS SAY

"My dog is good", "my dog loves puppies", "my dog also gets along well with males (as long as they aren’t dominant, they don’t try to make eye contact, they don’t challenge my dog, they don't come near me the owner, and they don’t touch my dog’s toy...)”. Dog owners lie, sometimes without realizing it. Look at the dogs, they never lie (the only dogs that lie, in a sense, are the ones that have been inhibited and don’t dare to react in an encounter with another dog).

8. EVEN THOUGH DOGS ARE PLAYING TOGETHER, YOU MUST PAY ATTENTION TO THE BALANCE BETWEEN THEM

"How beautiful, they are playing!". Maybe. Something that seems like a game to us, can be a challenge, a provocation, an imposition; the situation can be unbalanced and cause significant discomfort to a dog and can even escalate into a fight. Behaviors to watch out for are:
- chase (especially if it is always one dog that is chasing the other dog and the chased dog never succeeds in stopping the dog that’s chasing it, or if the chasing dog tries to bite the chased dog on its back or hind legs)
- hug (two dogs are standing on their hind legs and hugging with their front legs, this may indicate an increase in intensity that can degenerate into a fight)
- behavior of high stress or fear (bumping into the owners, hitting the owner with a closed snout, yelping, keeping its tail between its legs...) 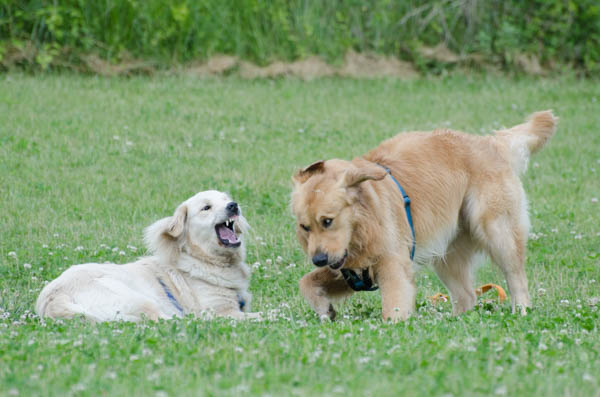 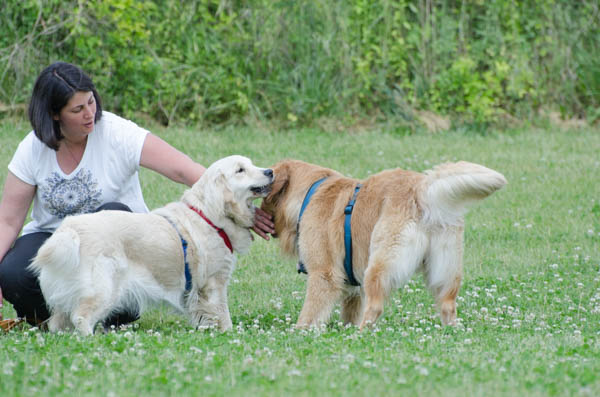 Two dogs are playing, a male and a female, a breed that people consider social and unproblematic. In a situation like this, you can easily think that they are having fun and it’s better to let them play without any interference from you. However, even in a case like this, it’s important to continue observing the two dogs and prevent that a dog from being affected by the situation, because it is unable to stop the other dog. The Golden Retriever female, a bit worried by the male’s eagerness, exhibits a defensive threat. As soon as she asks for help, her owner blocks the male, using her arm and gaze.

9. THE MOST EFFECTIVE WAY TO STOP A FIGHT IS TO NOT LET IT START

People often ask me how do I stop a fight. The best way is to prevent that a meeting becomes too intense and dangerous. Although dogs rarely get hurt (often they can get hurt when dog owners try to separate them), it is still a very stressful event if not even traumatic. When you’re in doubt how to avoid a fight, just avoid the encounter. If you can, look at how they behave in a safe environment, using a fence as a barrier (e.g. the enclosure of a dog area). If the behavior is not friendly, if your dog does not ask to enter the enclosure, forget about it. In the event of a fight, grab the collar, lift slightly, and when dogs are not grabbing each other, separate them. 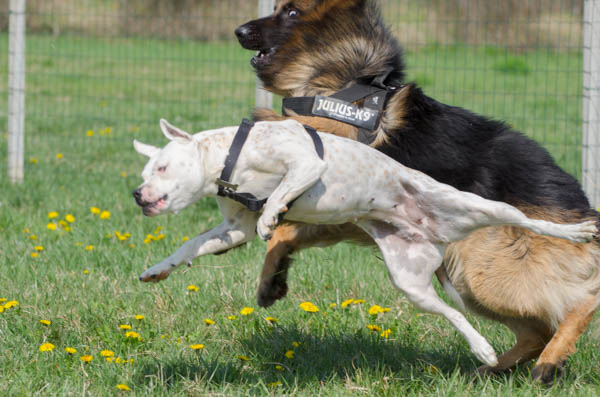 Aggressive communication is part of the normal behavioral repertoire of dogs. Although, communication is different from wanting to injure. Being able to understand the difference, and prevent risks, requires experience and a specific expertise. It is better not to take the risk. Avoiding an encounter is better than an encounter that causes physical and emotional damage. A Pit Bull female, named Macchia, uses her body to stop the aggression from a German Shepherd male. She doesn't try to injure the other dog with her teeth, but the confrontation is still intense.

10. NOT ALL DOGS NEED TO "SOCIALIZE" TO BE HAPPY

For a family dog, the most important element to be happy is a good relationship with the owner, and with any other dogs in the house. The family is the center of everything. A dog should never be afraid in its own home, due to people or other dogs. The encounter with unknown dogs can be fun and useful, but it can also be a source of stress. It is up to us to figure out if our dog really needs to encounter unknown dogs, if it can, if it likes it, if it's good for it.

It is not something we have to do whatever it takes to be good owners. There are other activities that can make our dog happy. 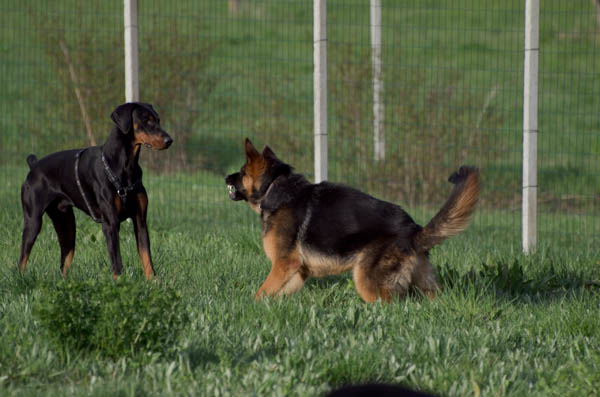 The German Shepherd puppy is so frightened by other dogs, that he collapses emotionally and attacks any dog. This dog cannot communicate nor interact. He reacts, that’s it. Before he can meet other dogs safely, the puppy must understand that dogs are not a danger to him. 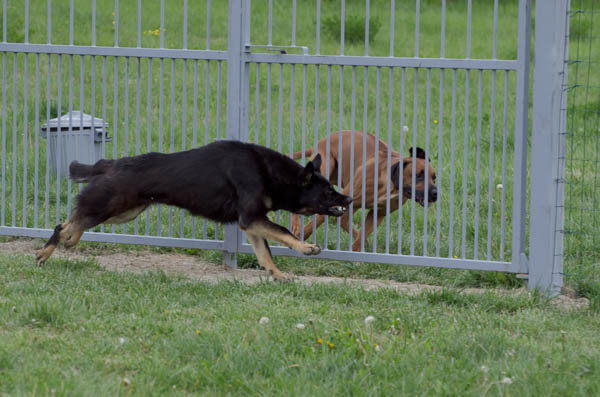 Arj is my German Shepherd female; she is a fragile dog, insecure and, as often happens to German Shepherds, she becomes defensive aggressive when under stress. Although she lives with other dogs, she is excellent with puppies and a very good and kind dog, she is unable to meet dogs she doesn't know. Her reaction is always aggressive. In this picture, she meets a Rhodesian male at the fence, which is a situation that protects both dogs from a physical confrontation.