Self-control is not a sitting dog

A foreign dog instructor makes a contact request (I can hardly call it a friendship request) on Facebook. We exchange a few posts on our own experiences with dogs. After a couple of months, he posts a video of his new puppy, a three-month-old Belgian Malinois. The caption describes the video as "approach on how to teach self-control".
The puppy dog is playing with a dummy toy: grabs it, plays tug of war, leaves it, and as soon as he leaves or loses the grip, the instructor lifts the toy up. At first, the puppy jumps and vocalizes, out of frustration, but finally he sits. The game begins again.
Same video, but this time both the puppy and the owner are standing in front of a closed door. The owner opens the door a few centimeters, and the puppy jumps forward. The owner shuts the door. The puppy tries to go to the door, then goes back, watches the owner, finally he sits. The door opens, and the puppy can go out.

I watch the video, and my first thought is that it makes no sense, from my point of view, to get a puppy to sit before playing or before it can go outdoor. There is a general tendency to start very early with a training aimed at sports, sort of like a race against time that does not respect the dog’s age-related needs or limitations.
A puppy can learn to sit in order to play, of course. Is it necessary? Is it useful? Above all, is it actually good for the dog? Not to mention, a dog sitting two out of three times is not logical in learning or in sport. It requires much more than skills depending on passive posture and renunciation to teach self-control.

And this is my second thought. Somewhere someone is convinced that "self-control" implies a motionless dog, preferably sitting or lying, in front of a stimulus. Someone keeps the bowl in his hand and expects the dog to sit. Then he pretends to place the bowl, but if the dog gets up, he lifts the bowl from the ground. If the dog does not sit, it will not eat. What's the point? Could someone please tell me why it is necessary to develop self-control? 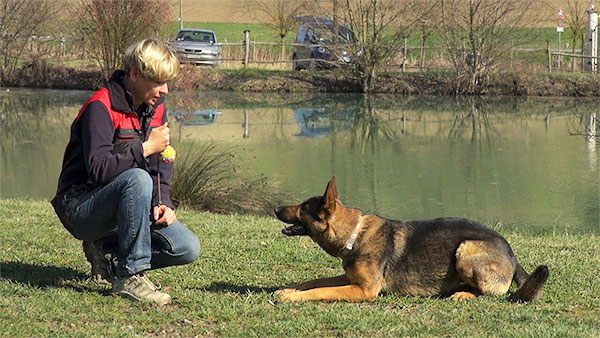 Now, I understand that aesthetics don't help. To us, a dog that is sitting, or lying, or that does not respond to a stimulus, seems to be capable of self-control. If we don't see anything, materially, physically or psychologically that force the dog to stand still, we spontaneously think of self-control. If no one forces the dog, the behavior is his choice, isn’t it?

No, it isn’t.
Brick sees a small hare in the parking area. She freezes. She remains perfectly motionless, staring at it with her ears pointed as a radar. Extremely slowly, she moves a step forward. Two steps. She moves forward without making any noise. The hare stands still, close to a grove of reeds. Brick must choose when to stop advancing and jump forward. The hare must decide how close Brick can come, before running towards its lair. For Brick, every earned centimeter is one more chance to succeed in the final pursuit. Brick jumps forward, the hare jumps and disappears in its lair. Brick wastes no time in looking for it, and comes back to me smiling.

Now, that's self-control! Nothing and nobody forced Brick to stop, to control each one of her approaching movements. No one forced Brick to give up the hunting and come back to me. Her every action is the result of her mental ability to control her emotional response when seeing the prey, and therefore to produce self-control also in her physical response. It is self-control if there are no barriers, there is no pressure, there are no negative consequences if the dog makes a mistake, if the dog reacts to the stimulus. At worst, the hare runs away, but there is no intervention by third parties. 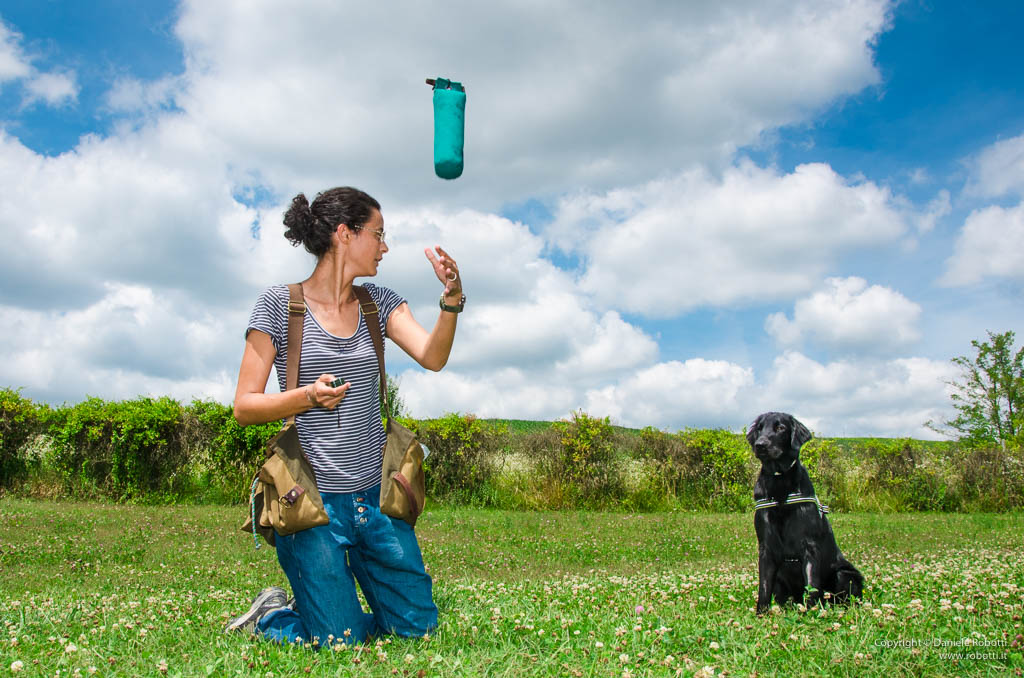 FOR THIS REASON, I RATHER SPEAK ABOUT LEARNED SELF-CONTROL WHEN I WORK ON THE EMOTIONAL AND MENTAL SKILLS OF A DOG.

When it comes to learned self-control, I can control the dog or control the stimulus/resource. Therefore, in the case of that video about the puppy dog, it is all about definition!

Imagine the scene. The puppy plays, leaves the dummy toy, the instructor lifts the toy up beyond where the puppy can reach it. The puppy, resigned, sits. There is no trace of self-control, because the puppy is never in a position to choose. The puppy is not choosing between taking the dummy or sitting. The toy is out of range. Learned self-control is a dog’s choice: learned behavior vs. reaction to the stimulus. In the puppy’s case, there is no choice, if the puppy wants to play again, or wants to go out of the door, it cannot do anything but sit.

WHEN A PROCEDURE, OR A BEHAVIOR, IS DECLARED "SELF-CONTROL", ASK YOURSELF IF SOMEONE IS NOT RATHER EXERCISING CONTROL ON THE DOG OR ON THE REINFORCEMENT.

The control may be evident, like it was in that video. However, it can also be associated with social inhibition, or previous experiences regarding negative consequences, because of the dog’s response to a stimulus. In other words, someone may have suggested that the dog shouldn’t get up, and that it shouldn’t react to stimulus, and the dog knows that if it does not act according to the owner it will lead to negative consequences. Ask yourself if, by removing any pressure and control over the dog and the resource, the dog would still choose that behavior (learned), or if it would go and take the ball, the food, the dummy toy or whatever it is. 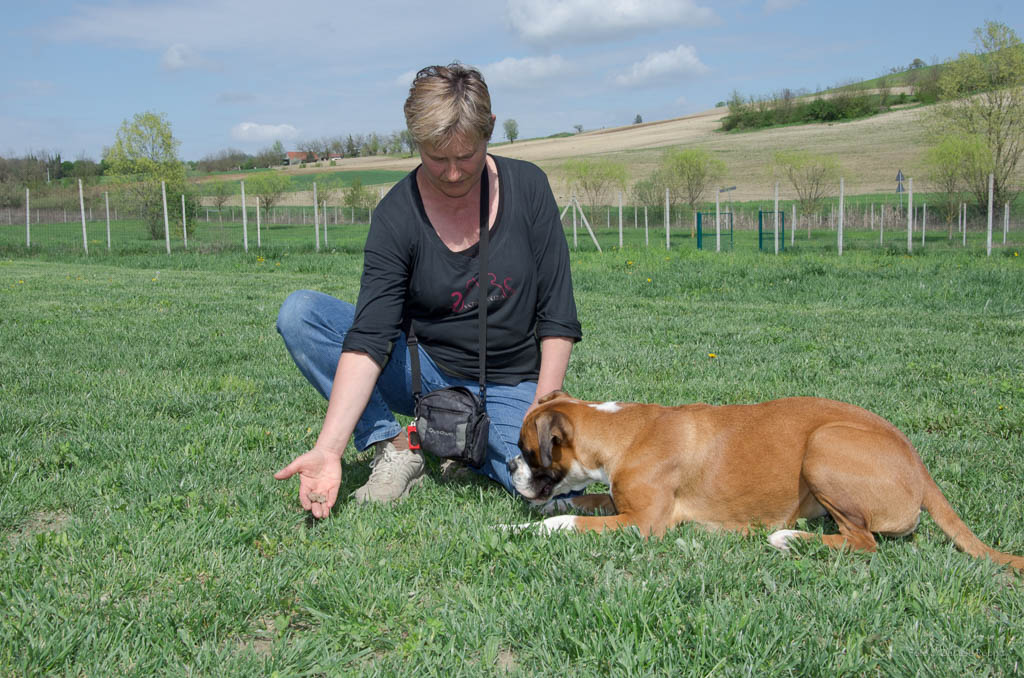 IF THE BEHAVIOR PERSISTS ONLY THROUGH TOOLS (E.G. A LEASH), SOCIAL PRESSURE, OR BY CONTROLLING THE STIMULUS, IT IS INCORRECT TO SPEAK OF SELF-CONTROL. THAT IS CONTROL, NOTHING ELSE.

I have worked with self-control for two years, in order to better understand the mechanisms. By the end of this year, we will publish the results of this study. What I can anticipate is that fundamental elements of self-control are choice and trust. Self-control begins when the dog is truly free to choose, and in our minds, even before in our actions, there is no pressure, no control.

Stay tuned ... EARLY 2016 we will release the first complete opera, text + photo + VIDEO dedicated to SELF-CONTROL in the work with the dog.