A gate. The idea of being able to get out of the kennel is getting the dog excited. He lives in a shelter, he spends all his time in a box. The leash is an intense emotional stimulation. The person who holds the leash opens the gate. The dog runs for the exit. The gate gets shut. The dog pulls back, confused. The gate opens again, the dog tries again. The gate gets shut again. This sequences goes on for many many seconds, sometimes for whole minutes. Until the dog gives up, he stops or he sits. In that very moment, the gate eventually opens for good.

I look at the dog, I feel his frustration, his confusion. There is no communication, no dialog. There’s only an automatic and mechanical reaction. If you run for the gate, I’ll shut it. You can get out just on my terms. But the dog doesn’t give a rat ass about terms. All he wants is to get out of that bloody gate, to walk, to sniff, to pee, to run, if it’s possible.  However the good trainer knows that it’s wrong to allow the dog to do whatever he wants. Because to let him trespass that gate would mean to make him more excited, to teach a wrong behavior to him. To insist for him to give up, instead, means to teach the dog how to keep calm. Calm. 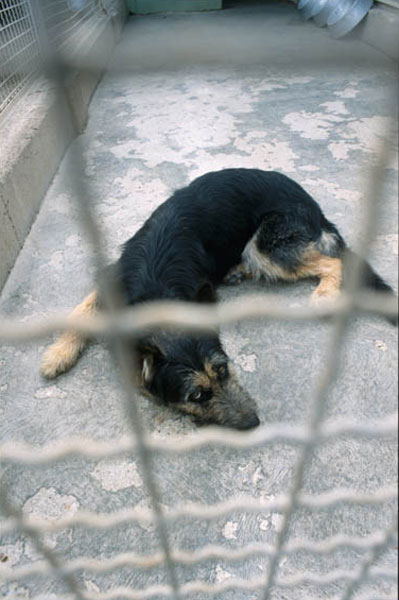 There are many ways to teach calm to dogs. One of the most known is to use a blanket. You grab a blanket, you make the dog stop on it, and you give him a treat. Especially, you make him understand that he has to stay on the blanket without moving. He has to keep calm. Even the pet carrier is used to force overlively pups to calm down. If he doesn’t stop playing, you lock him up in the carrier, so that he can eventually relax and rest. Not that he has many other choices, actually. Even when it comes to food, it’s all about calm. You take the bowl, the dog jumps up and down ‘cause he’s excited by the perspective of food. Instead of set it down, you just pretend to do it, if he jumps up, you lift it again. The goal is that he sits till you set the bowl down and tell him that he’s allowed to eat.

I’ve been there, I passed through the sit-at-the-gate phase, the sit-to-get-food one, and in 2004 we used to do the blanket exercise with the rescue pitbulls of the “Ex-combattenti” project. We sat on a chair and we wait for the dog to lay down. Since we didn’t want him to lay on cold and hard concrete, we offered a blanket to him. I also used a carrier, but the only time I thought it was necessary to handle a puppy was in 1995. I never did it again.

Like many other trainers, I used to think that those methods were reasonable, that they were necessary to give the dog the tools to manage to live with the owners. I used to think that a dog should learn to control excitement, frustration, to not overreact to incitations. The calm dog. Every owner dreams of it.

Today I’m getting annoyed by those same exercises. I changed my mind for one reason: I learned to see the world through dogs’ eyes. Those exercises don’t teach calm. From the dog perspective they just teach to give up in a resigned passivity and to surrender to a major strength. To shut a gate on the muzzle of a dog who wants to get out doesn’t mean to teach him something. It’s just a little ransom. To teach a dog to lay down on a mat doesn’t mean to give him the tools to deal with incitations, it just means to force him into physical passivity, to surrender and even avoid to try anything.

You cannot teach calm. A dog, who’s sitting or laying down motionless, is not calm. He’s just sitting or laying down motionless. The lack of a physical reaction reassures us about his emotional control skills. He keeps sitting, laying down motionless ‘cause he learned not to react to that specific stimulus, and obey to us. Wrong. It’s quite the opposite. The freedom to move, to interact and to react to that stimulus show the real motivations and emotions of the dog. When it comes to emotions, a well balanced and happy dog needs no dumb control tricks in order to handle a specific stimulus. The dogs who come under such methods learn to shut themselves off, to avoid any interaction with the world. They don’t communicate.

Those exercises teach nothing but passivity. They aren’t self-control exercises, since control is applied just on the body, not on the emotional state (which is actually neglected), and it comes from the outside, not from the dog himself. Self-control isn’t about stillness and about avoiding interactions with the world, it’s about choice and listening skills. A stimulus can trigger a huge response in a dog but he can be physically active and still have self-control. On the contrary, a dog can lay down motionless and still be ready to emotionally explode when he’s allowed to interact with the stimulus. 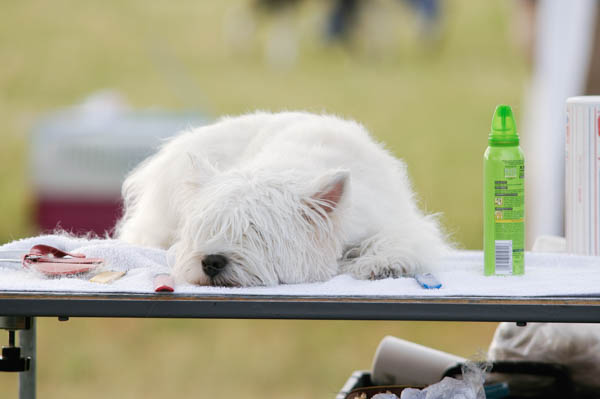 I never ask to dogs to sit in front of doors and gates. I never ask them to sit when I set their bowls down. I never turn my back to them or ignore them while they are greeting me. I don’t teach them to lay on a blanket. I did it, and I quickly understood that they can adapt their activities to the group as this is a natural skill of a social animal. You have to earn it by turning into a natural part of his life and to allow him in. I don’t use crates with puppies. I fulfill their needs of activity, stimulation, relationship. I’ve never ever locked a puppy up in a cage, and I’ve never had an anxious or destructive pup. I help dogs to develop their skills so that they can handle their emotional states through a learning process based on experiences, never on calm. On the contrary, I think that it’s important that dog is allowed to express his emotional state, his personality, his needs and motivations. Every pup, every dog, has specific characteristics. This process lasts months, years. You can’t get such an outcome with a bunch of mechanical exercises which are based on resources control and physical passivity.

There are some procedures that look logic, right, even necessary. Trainers and owners learn them, apply them, they are sure that it’s the best way to reach their goal. A dog laying on a mat in a bar seems more well behaved than one who jumps over anyone who’s passing by. Calm seems better than an emotional reaction to stimuli. Physical control over the dog can help the owner, make a trainer look successful, but it never helps the dog. It doesn’t give the dog the tools to choose a behavior, to express his emotional state. A dog who learned to lay on a mat isn’t happier than a jumping one. A happy dog is the one who has to get in a bar just when he can deal with it and who can naturally adjust to the family activities. A dog who is respected, understood and who has listening owners.

Thumbs up for the dogs who aren’t calm.

Two common rabbits are wandering around a few meters from us. Brick looks very busy in trying to get a slice of pizza, but suddenly she sees them. She doesn’t twitch , she doesn’t run. She walks very slow, silent. She hides close to the car. She’s motionless. Is she calm? She isn’t. On the contrary, every molecule of her body is quivering with hunt thrill. But she shows a perfect physical self-control. We get physical passivity wrong and we think it’s emotional calm. Brick demonstrates that a dog can be very controlled in his movements and feel a powerful emotional tension at the same time. To understand dogs means to look beyond the surface, to learn to see the depth of their being.