The "it was the dog's call" delusion - Episode 1

“But he does want this”. This is what a friend of mine told me when I pointed out that the dog she was cuddling was stressed out.

Fact: the two of them, the tiny chihuahua and she, meet. He run towards her to greet her. She picks him up, holds him tight and pets him for about one minute. The dogs starts licking his nose since the very moment she touched him till she set him free, then goes away, pees on a pot, then goes to the opposite side of the room, avoiding to approach us again.

Her perspective: We know each other and he’s fairly happy to meet me again, so since he’s the one who came to me, he must want to be cuddled, hence I’m picking him up, holding him tight and pet him. (Does that then sets him free) Oh, bad dog, don’t you pee indoor!

My perspective: the dog was probably happy to see her (even though I suspect food is quite involved in their relationship, so he might just be happy to see his private food dispenser to approach). Moreover she was yelling his name, which is quite compelling to many dogs, as you’re basically demanding them to approach, which isn’t much of a free choice. A mutual Hi would probably have been appreciated, but she really overdid.

I am content with saying hi to some random acquaintance I happen to run into, but I’d probably call the police if they got me a massage in the middle of the road. The chihuahua didn’t call PETA, nor snapped at her as he’s more patient than me, but he did undergo stress and showed it clearly. Too bad that no one noticed it. So I told her to put him down, which she did, but the dog was so uncomfortable that he needed to calm down peeing on the pot. Then he did his best to stay away from us. How can we state that he was happy to be squeezed like a doll when he gave us so many clues that he was unease?

What’s the point of this story? The lack of free will.
When a dog apparently misbehaves, people use to blame it on the dog itself. They never question themselves, they never wonder about how compelling some drives can be. 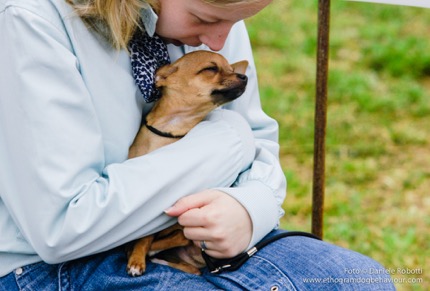 The chihuahua didn’t really choose to go to my friend, he was asked to.
If you stumble on an acquaintance and he doesn’t notice you, you can decide whether to reach him and say hi or not, but if he spots you first and greets you, what can you do? You have to come closer and say hi. Your social drive makes you do that. Besides the tiny dog surely didn’t ask to be held in her arms. Just because it is friendly to you, it doesn’t mean that it appreciates to be petted, hugged or whatever.

But how can we tell that a dog isn’t really choosing to act that way?
How can we know that it got caught in a trap and has lost its free will? We need to observe it and to be able to understand what we see. We need to get rid of our human interpretation and read its language properly. The ethogram of the dog is the fundamental alphabet, it’s impossible to understand how a dog feels without mastering it. But then it’s up to ourselves: once we have the basic knowledge, we need to be open minded, experienced, enlightened and make our move to help the dog to restore his liberty. If our choice is right, the dog will immediately feel better and we’ll know that we were right.

(all about the stress behaviors of the dog Ethogram of fear, stress and de-escalation behaviours of the dog)