The "it was the dog's call" delusion - Episode 2

We used to go to the restaurant with my Golden Retriever back in the day, when he wasn’t a grumpy granpa yet.
He didn’t mind people and waiters and enjoyed to have some pizza, so it was a win-win. Yesterday evening we happened to get hungry right after a vet appointment, so we went for a pizza like we used to in the good gone days.

My old boy is 13 years old by now and his patience skills are as shaky as his hips, whereas his stomach is still very young and lively, so he was starving and wasn’t happy with our waiter to take it so long with those pizzas.
Five minutes is really too much to bear for a food craving retriever: he was agitated, wasn’t able to rest, kept laying down and standing up, panting and staring at us with an obsessed and delirious look on his face.

When he started to bark, we gave up and we took him to the car. As soon as he crossed the exit door, he immediately felt better and relaxed. He took a nap in the car and we had our dinner. 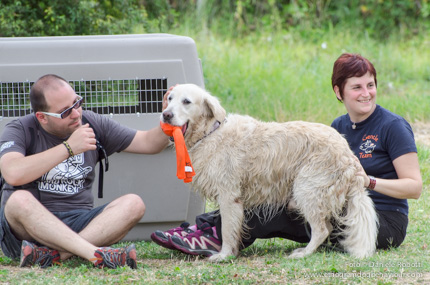 Sylvie with "Blue" the Golden who loves pizza!

What’s the point of this story? The lack of free will. When a dog apparently misbehaves, people blame it on the dog itself. They never question themselves, they never wonder about how compelling some drives can be.

My golden retriever didn’t really choose to go crazy obsessive on some non-existent pizza. He’s really old and lately he happens to lose his mind now and again. All his inclinations, his aggressiveness, his insecurity, his obsession tendency are enhanced and he’s not that clear headed at times. He got trapped into his food fixation and wasn’t able to escape, he was feeling bad much more than us, being embarrassed for his attitude in the restaurant.

But how can we tell that a dog isn’t really choosing to act that way? How can we know that it got caught in a trap and has lost its free will?

We need to observe it and to be able to understand what we see. We need to get rid of our human interpretation and read his language properly. The ethogram of the dog is the fundamental alphabet, it’s impossible to understand how a dog feels without mastering it. But then it’s up to ourselves: once we have the basic knowledge, we need to be open minded, experienced, enlightened and make our move to help the dog to restore his liberty.
If our choice is right, the dog will immediately feel better and we’ll know that we were right.

(all about the stress behaviors of the dog Ethogram of fear, stress and de-escalation behaviours of the dog)